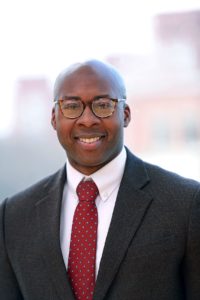 Pierre Lucien is in his first year studying for a DPhil in Education. He is planning to use quasi-experimental quantitative methods to gauge the effects of participating in college and career pathway programmes in Massachusetts, under the supervision of Kellogg Fellow Ariel Lindorff and Steve Strand. Originally from Les Cayes, Haiti he has been living in Boston, USA for the past four years, where he was working as a Research Analyst at Harvard University and Policy Analyst at the Massachusetts Department of Education. He has moved to Oxford to pursue the DPhil.

Why did you apply to Oxford?

For four years, I sought work experiences and took courses to be competitive for Harvard admission. When it was time to apply, the department suspended admissions, due to the pandemic. I was advised to explore Stanford, but due to the time difference and geographic distance from Boston, I figured I might as well investigate international offerings. Unbeknown to me until then, the resume and transcript I built were better aligned with the Oxford and Cambridge approach to doctoral studies than that of Harvard and Stanford. Furthermore, the Oxbridge application was substantively different. Consequently, I chose to forego applying to the US altogether and focus my attention on universities in the UK.

I then reached out to faculty members from institutions in the UK, with whom I had methodological and topical alignment. My list included but wasn’t limited to Oxford, Cambridge, and UCL. The Oxford faculty members were the most responsive and showed the most interest in my work, which suggested to me that it would be optimal to pursue my DPhil here. If I got that much engagement as an applicant, I was confident I would receive sufficient support as a student.

What has been your experience of being a Kellogg student?

Being an older DPhil student with a relatively developed research plan, I am admittedly less involved in social activities at Kellogg. What I have observed though is that MCR leaders are very engaging and have put a lot of effort into welcoming us into the college and orienting us to the university and city of Oxford.

I have only eaten at the Dining Hall on a few occasions, as I prepare my own meals in college accommodation. The times that I have been there, students and Fellows were very approachable and conversational. In fact, one can expect to be approached and spoken to whenever at Kellogg.

What is your experience of being an international student?

Coming from the United States, I thought it would be easier to adjust to the United Kingdom. Two challenges I faced early on stand out: 1) I brought European converters, but the UK outlets are different from the EU, so my laptop and phone batteries died on my first day 2) I kept looking the wrong way when crossing the street, because they drive on the left here, and I was almost run over! Both issues have been resolved though. I must also note that although the US and UK speak the same language, I have had to ask people to repeat themselves more than I thought I would.

How do you think the ‘Oxford experience’ differs for black students?

The minority experience at a prestigious institution presents unique challenges. Succeeding here doesn’t only require academic preparation, but also social preparation. Are you speaking, dressing, or even eating in a manner that is embraced by the majority? If not, it could lead to feeling isolated and lacking a sense of belonging.

Some needs aren’t as easily met. This does not affect me personally, as I shave my head, but black male students must travel far to get a haircut as there isn’t a black barber near the Oxford campus. This is possibly the case for black female students as well. The difference in hair texture of black students from non-black peers render hair cutting and styling a nuanced need.

What do you think is the best thing about being part of the Kellogg community?

The absolute best thing about being at Kellogg is the diversity of the community. In addition to the United Kingdom and the United States, I’ve met Kellogg students who are from all over the world, including but not limited to the Netherlands, Poland, Lebanon, Canada, Germany, Kenya, China, and more. Likewise, I have interacted with students across the various departments at the university. I once had a chat in the Kellogg Library with a student who is studying cancer in naked mole rats.

Do you have any advice for future applicants?

Having only been here a few weeks, I can already say that coming to Oxford is one of the best decisions I have ever made. Irrespective to race, my advice to students who wish to apply to Oxford for a DPhil or a master’s degree would be to identify faculty members, or fellows, with whom they share research interests. Furthermore, only seek to work with those who are keen on supervising you. One of the highlights of my first month is, without a doubt, meeting and speaking with my supervisor. Her excitement about my arrival was affirming and it was reassuring to see that she and I are on the same page.