Simona Sulikova is studying for a DPhil in Geography and the Environment. She is a member of the Oxford University Jui Jitsu Club and took part in the Randori Nationals in Northampton, on the weekend of 23rd – 24th February 2019. 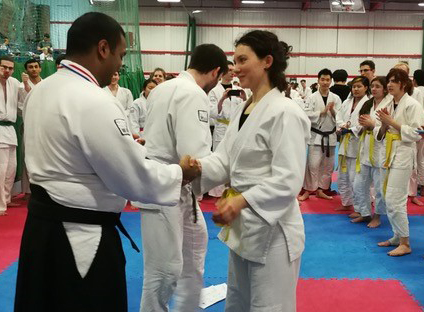 In Japanese Jiu Jitsu, we are very friendly – you have to be, if you end up punching each other on an almost daily basis. Every year, most clubs from the UK swarm upon Northampton for the Randori Nationals – a jitsu competition with two components, ne-waza (ground fighting) and tachi-waza (standing techniques), as well as two days of training taught by the most experienced senseis. It’s also a great opportunity to see old friends and go out, something we all regret doing on Sunday morning.

Fifteen members of the University of Oxford team went; ten of us were entered into the competitions, and we left with five medals! Personally, I was competing in the yellow belt women’s 43-55kg category. Having won all of my fights on the first day, I was in the finals on the second day. Whenever I watch the fights happening just before it is my go, I can feel the adrenaline rise, the voice in my head thinking “oh that is such a fast, aggressive fight! Am I like that? Surely not?” Then my name is called out, I take my belt off and put a red one on; my opponent, a sweet girl with ginger hair from Liverpool University, puts a white belt on (this helps the judge distinguish between us if multiple rounds happen). We sit back to back, legs straight, hands on knees. The referee calls the start, we turn around and try to grab a good hold of each other. I would smile when I realise I’m stronger than her, except I don’t have the time. The next moment, I’ve tackled her to the ground, my arm beneath her shoulders, in kesa gatame – a scarf hold. She manages to hold one of my legs in something called half-guard, so we struggle for a moment until I free myself, and then pin her down for 15 seconds. The whole fight is over in less than a minute.

I’m leaving with several bruises, but a large smile on my face and a gold medal in my pocket. A great weekend.