Chris Davies is an Emeritus Fellow of Kellogg, and was college Vice-President for several years. He was Bindu Vinodhan’s tutor during her studies as a Kellogg student. 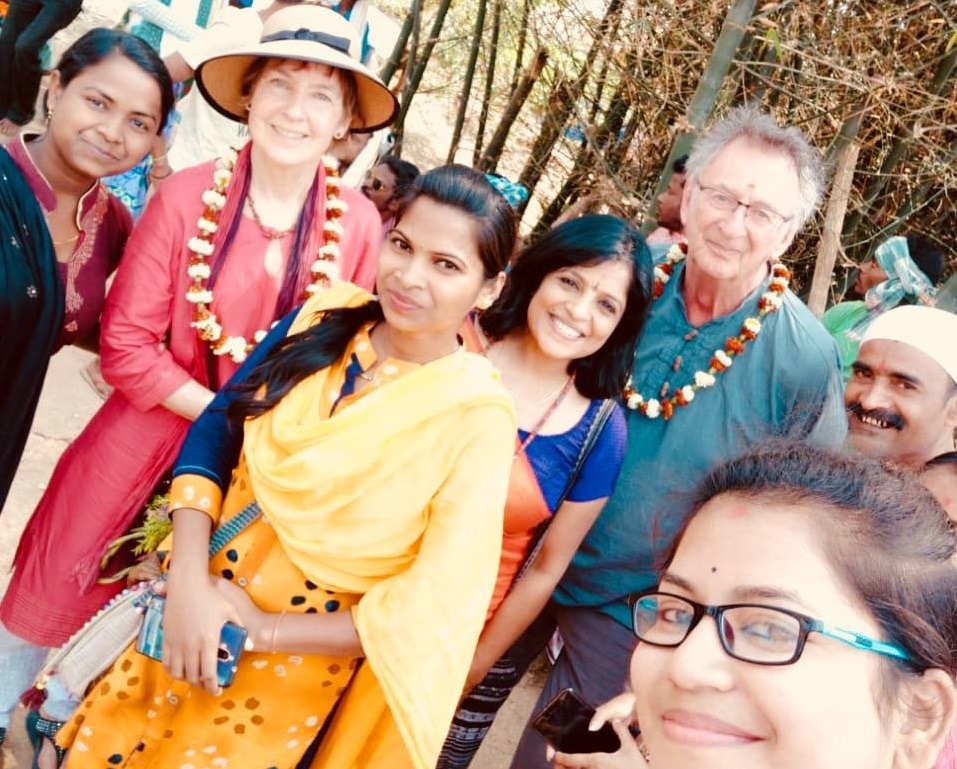 The cover of Kellogg’s excellent new magazine CONNECT features a lovely image of smiling weavers from the village of Chuliaposi in the east Indian state of Odisha. As the article inside the magazine explains, these women are active members of a project that Kellogg alumna Bindu Vinodhan has been running for the last two years, which aims to restore confidence and a degree of economic independence to the economically and socially disadvantaged community of tribal and Dalit villagers. These are mainly women and children, with only a small number of men remaining, following many years in which poverty and failed crops led to the suicide of many of the farmers, as well as the total loss of the skills and resources for weaving that had once been an important part of the village economy.

At Bindu’s invitation, my wife Kathy and I visited Chuliaposi on International Women’s Day in March this year, and were profoundly impressed by what has been achieved there, through the relentless efforts of Bindu, her colleagues, and the women of the village themselves. We had an unforgettable visit, with a village feast, dancing, and a display of the growing weaving skills by the women. There is now an exceptional sense of optimism and purpose among the villagers, and real pride in what had been achieved already: the creation of a community centre with its four looms, 18 of the women already well-advanced in their training as weavers, using traditional methods and dyes, and plans for further training and the development of opportunities to market the cloth both within India and internationally.

When, less than two months later, we saw the news of the approaching Cyclone Fani, and traced its predicted progress up through Odisha, we anticipated the worst. The coastal town of Puri and Bhubaneshwar, the state capital, had already been devastated by the arrival of the cyclone. The prospects for the very many poor villagers in the state seemed bleak as the storm began to move north. It seemed inevitable that the huts and community centre in Chuliaposi would all be flattened, throwing the project back to its very beginnings again and, far worse, threatening the lives of the villagers themselves.

In the event, the cyclone weakened somewhat as it moved north, and the damage – though considerable – was nothing like as disastrous as feared. The villagers lost all their crops, some of the homes were damaged, but the community centre and its looms survived intact. Most importantly, no lives were lost in the village, although over 60 deaths have now been reported across the state which, terrible as that it is, represents an extraordinary achievement in terms of the planning and actions undertaking by the state authorities, given the nearly 10,000 deaths that occurred in the 1999 super cyclone.

So the project, and the villagers themselves, can continue to grow. Bindu and her team can push forward with their plans to build a more substantial community centre, as well as a school for the children of the village most of whom, as untouchables, receive little or no educational opportunity from the local school. The post-cyclone repairs are already underway, and the production of cloth by the newly trained weavers is being accelerated, in order to make up as much as possible for the loss of income from the destruction of the crops. Hopefully, Bindu will be able to come to Kellogg before too long, to tell the latest news of the project and show us some of the fabrics being produced in Chuliaposi now.

If you want to learn more about the project, or find out how you can contribute in some way, please follow either of these links: http://maunadhwani.org or contact bindu.vinodhan@maunadhwani.org