Is the future of transport electric? We have to do everything, and fast

Home » Blog » Is the future of transport electric? We have to do everything, and fast

(This article is a follow up to our news story Kellogg Fellow publishes chapter in ‘The Climate Book’ and was originally published by University Oxford, 9 November 2022: Expert Comment: Is the future of transport electric? We have to do everything, and fast)

Focusing solely on electric vehicles and technology that is not proven at scale is actually slowing down the path to zero emissions – it diverts resources and political will away from other solutions. In reality, if we are to meet the decarbonisation targets of the Paris Agreement by 2050, we also need to focus on the movement of people and goods – and look at introducing traffic reduction targets for the UK, as has happened in Scotland and Wales.

By Dr Christian Brand, Contributor to The Climate Book (chapter 4.17 ‘Is the future electric?’), Co-director of UK Energy Research Centre, Associate Professor at University of Oxford and Kellogg Fellow.

Only by curbing all motorised transport, particularly private cars, as quickly as possibly can we tackle the climate and air pollution crises – or so my colleague and friend Jillian Anable and I argue in a chapter of Greta Thunberg’s recently published The Climate Book. 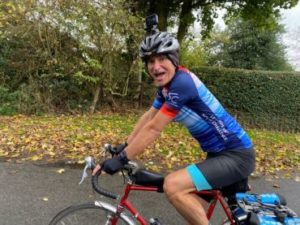 On the day the clocks change to ‘British Winter Time’, I cycled from Oxford to London with Emilie Vrain, of Oxford’s Environmental Change Institute, to attend The Climate Event at the Royal Festival Hall, which showcases Greta’s publication.

I am one of 100 contributors to the book and was invited to the London event. By travelling by humble bicycle, I hoped to raise awareness of the huge challenge we face in decarbonising the way we move by using the most energy-efficient and low-carbon form transport available today.

It is 100 kilometres, takes about six hours (plus breaks) and covers rural counties, the Chilterns and urban London on mostly quiet roads – no motorways, of course.

Cycling is cheaper, healthier, better for the environment, and no slower on congested urban streets. It is a key part of the solution to decarbonise transport, but it will not be enough. We have to do everything, and fast.

Our chapter provides ideas and evidence of what we can and should do, at the system level and individually. We cover a range of topics such as 15-minute neighbourhoods, banning large SUVs in cities, active travel, car restraint, ‘slow steaming’ and frequent flying.

AFTER the 30 October event in London

Strong side winds and rain (and London drivers) made the 105 km journey much harder than expected. But there were no punctures and no accidental turns to end up on motorways, which was a bonus. And it was worth it, not least for the reduced carbon footprint.

How much carbon did we save by cycling instead of driving or using public transport? If we had travelled by car, our lifecycle carbon emissions for the Oxford-London journey would have been about 16 kg of CO2.1 If we had used the train, about 7 kg of CO2. Going by bike, meant this would be less than 2 kg of CO2.¹

Compared to driving, we saved 28 kg of CO2 – the equivalent to the emissions from eating 10 servings of lamb or chocolate, or sending 7,000 emails.¹

By chatting to people and wearing the climate stripes we hope we raised awareness along the way of the huge challenge we face in decarbonising transport.

As for the event, Greta gave a rousing speech and was interviewed by journalist and broadcaster Samira Ahmed. The live stream can still be viewed here. The book, currently in Amazon’s Top 20, has received very positive reviews so far.

Why is active transport important?

Transport is one of the most challenging sectors to decarbonise because of its heavy fossil fuel use and reliance on carbon-intensive infrastructure – such as roads, airports and the vehicles themselves – and the way it embeds car-dependent lifestyles. One way to reduce transport emissions relatively quickly, and potentially globally, is to swap cars for cycling, e-biking and walking – active travel, as it is called.

As many as 50% of car journeys are of less than five km and could easily be replaced by active travel. Electric bikes increase this range to 10 km or more. They have become more popular over the past few years as prices have come down. These bikes allow older people to cycle and help riders cycle in hilly areas. But they still provide physical activity. In the Netherlands and Belgium, electric bikes have become popular for long-distance commutes of up to 30 km. They could be the answer to our commuting problems.

As many as 50% of car journeys are of less than five km and could easily be replaced by active travel. Electric bikes increase this range to 10 km or more. They have become more popular over the past few years as prices have come down. These bikes allow older people to cycle and help riders cycle in hilly areas. But they still provide physical activity

In our own research, we have shown that people who walk, cycle or use e-bikes have lower carbon footprints from all their daily travel, including in cities where lots of people are already doing this. Strikingly, the carbon footprint for daily travel is up to 84% smaller for people who walk or cycle than for people who use other modes of transport. Emissions from cycling can be more than 30 times lower for each trip than driving a fossil fuel car, and about ten times lower than driving an electric one.

Our research has also shown urban residents who switch from driving to cycling for just one trip per day reduced their carbon footprint by about half a tonne of CO₂ over the course of a year, and save the equivalent emissions of a one-way flight from London to New York.

If just one in five urban residents permanently changed their travel behaviour in this way over the next few years, we estimate it would cut emissions from all car travel in Europe by about 8%.

It’s not all about men and women in lycra, cycling can contribute to tackling the climate emergency earlier than electric vehicles, while also providing affordable, reliable, clean, healthy and congestion-busting transportation.