On the weekend of 13 – 15 November, Kellogg students, and members of the Oxford University Polo Club (OUPC) Anouk Moll and Edward Wang-Chang, along with their team mate George Tebbutt from Trinity College, took park in their first national tournament, the SUPA University Challenge.

Having only recently joined OUPC, after receiving sports funding from the Kellogg Sports Committee, they put on an impressive display, winning all four of their matches, and leaving the tournament undefeated with a total score of 17-03, making them the National University Polo champions in the B1 category. Anouk, Edward and George will hold the championship title until the next tournament in February 2022, when they compete again.

If you’re interested in joining OUPC, one of Oxford’s oldest clubs – it was founded in 1874, only three years after the sport came to Britain – Anouk, shared the following information with us: 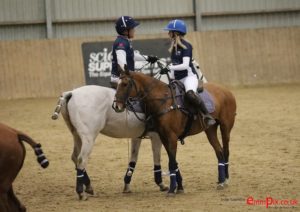 We try to practise two to three times a week, depending on our schedules and assignments. I decided to sign up because I have been horse riding since the age of six, having posters of horses all over my walls as a little girl. In recent years I was less motivated to train because dressage is quite an individualistic sport, and I was missing speed and team dynamics. In my first week at Oxford, I signed up for a taster session with OUPC and was immediately hooked. We have to work together with not only our horses but also each other, all at immense speed which is absolutely exhilarating. A big benefit is also the warm welcome at OUPC, everyone is friendly and keen to play together regardless of player levels. Making it very easy to learn from better players in the club. 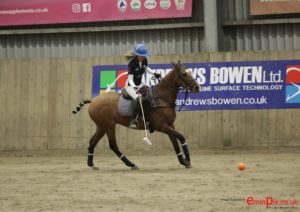 OUPC work with Oxford Polo, a club local to Oxford with around 50 horses; they also work with various schools in the area and host a number of professional players. They take really good care of the horses, and we get to use them for our training sessions. They also transport the horses to any games OUPC participates in, which is great because we get to play on horses we know very well. Plus, they are good at letting us compete with our favourite horses (I definitely have a favourite). In official, big tournaments, each player uses four horses in a set of four games (called chukkas) back to back. But we typically only play two shorter chukkas per day at nationals. Which means the horses rotate between all the players of OUPC and get to rest between the matches (and get lots of cuddles).

I believe OUPC hosts another taster session in Hilary, so come try it out if you are interested!

Further information can be found on the OUPC website.