Kellogg student Brooks Newmark (DPhil, Education), is currently in Ukraine working with colleagues to evacuate people. Here he tells us why he decided to drop everything and go to help with the evacuation effort, as well as his experience so far. 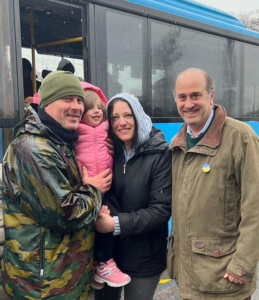 “I had just finished my third week of field work for my DPhil on Education Policy in Rwanda. I had completed nine focus groups with teachers in two regions in Rwanda and was waiting to start transcribing all my interviews.

Anyone who knows me knows I bring new meaning to the word procrastination. The war in Ukraine had just started and as usual with time on my hands I was spending more and more time scrolling through news items and social media. I noticed a Latvian friend of mine had brought a bus down to the Polish border and was moving refugees away from refugee centres and was taking them to Germany and France who seemed to be the only countries welcoming refugees unconditionally other than the five countries on the Ukrainian border (Poland, Hungary, Slovakia, Romania and Moldova).

I am if nothing impulsive too. So I messaged him from Kigali and asked if I could join him. Of course he said yes. So I dropped my research (yes I am already six months behind on my Confirmation of Status) and hopped on a plane to Warsaw via London (it was -9c in Poland versus 29c in Rwanda) for a quick change of clothes.

When I arrived in Poland I made my way to a small down on the Ukrainian border where my friend had based himself. In our first couple of weeks working together we bussed about 1,600 refugees from the Polish side of the border from two refugee centres (Tomaszów Lubelski and Korczowa).

The pressure diminished on the Polish side of the border – the Poles were amazing at quickly processing people and finding them places to stay. Our Home Office meanwhile was only accepting refugees with family connections. Back to that later. I then suggested we figure out how to bus women and children from Lviv and Kyiv both which were under threat from the Russian advance from Belarus and the aerial bombing campaign. We found a Ukrainian bus company and hired three buses to work with us. We began moving women and children to the Polish border and the safety of Poland. By now we had moved over 4,000 women and children including 70 orphans.

As the danger in Lviv and Kyiv diminished but with Russian soldiers leaving a trail of war crimes in towns like Bucha, Irpin and Bordyanka outside Kyiv we moved our operation further south and east now with 5 buses working in Vinnytsya and Zaporzhzhia where many refugees were coming from Mariupol and Kharkiv. By the end of week six we had moved almost 6,400 women and children and 140 orphans (my Latvian partner was brilliant at finding homes for orphans in Riga. To be clear the orphans were from orphanages so came in groups with support staff).

In the meantime someone I had met in Kyiv from when I had given talks at the University there three years ago was messaging me from her basement with her mum about the bombs that were exploding around her. I suggested she apply for a visa with her mum under the Homes for Ukraine Scheme. After a three week wait both mother (Svitlana, a pediatric nurse) and Ekaterina finally made it to England for Easter and are now staying with my family. I had come back for four days to be with my family over Easter.

I am now back in Ukraine. We have to date now bused over 7,500 women and children. Our focus now is further to the East of the country to Dnipro and Kharkiv – both cities are now targets for the Russians. So we are now having our buses urgently evacuating women and children from those two cities as well as still bussing refugees from Vinnytsia and Zaporzhzhia in the south where refugees are still coming in from Mariupol. I visited Vinnytsya to thank the Mayor for his support for our efforts and to thank the bus drivers for their work and to meet some of the women and children. One soldier I met thanked me for taking his wife and children to safety as it meant he could concentrate on his fighting the Russians without worrying about what was going to happen to his family.

I was hoping to come back to Oxford for first week but was approached this morning by the head of the Ukrainian Institute for Human Rights who asked me if I could urgently evacuate 400 disabled children from Kharkiv. So I am now staying in Ukraine while I try to find a care home or care homes for all the children in the west of the country. Once I have sorted somewhere to take the children I will then go to Kharkiv to get the children out. Why? I just want to make sure this happens as quickly and as smoothly as possible in addition to supporting my bus drivers who I am asking to go into an unsafe area. If I am there I am hoping they will feel more confident to go to there to get everyone out who needs to get out.

I am not sure when I will be back in Oxford, as the situation is constantly changing. I thank my supervisors for being so understanding!”

On Monday 9th May, Kellogg is hosting a concert in the Dining Hall to raise funds for the Disasters Emergency Committee appeal to help those affected by the Russian invasion of Ukraine. Find out more here.