Kellogg College, founded on 1st March 1990, is the University of Oxford’s largest and most international graduate college.

Our roots lie in the University of Oxford’s outreach activities, and especially to its commitment to lifelong learning. During the 1980s, a group of academics in the University’s Department for Continuing Education came together to work towards the establishment of a new College at Oxford. A College which was designed to offer fellowship to senior members of the University who had a particular involvement in the University’s lifelong learning and outreach activities, and one that would also be a College for part-time students should part-time degrees become a reality. With funding from the W.K. Kellogg Foundation (WKKF 2020 Annual Report), the College was established. It was in 1992 that the College matriculated its first Master’s students reading for the degree of MSc in Educational Studies.

After a lengthy search for suitable premises, the College secured a four acre site in a prime location in Norham Manor to which it moved in 2006. The Norham Manor Estate was developed in the second half of the nineteenth century and the Kellogg site contains a number of the original villas set within spacious gardens. Most of them are listed as buildings of special architectural or historical interest and the whole campus is included in the first conservation area designated by Oxford City Council in 1968.

In its short life, Kellogg College has celebrated the graduation of thousands of students, most of whom would not have had the opportunity to study at Oxford had it not been for the University’s decision that postgraduate students would be permitted to study for certain degrees on a part-time basis. Part-time degree study is now firmly embedded and accepted at the University of Oxford and Kellogg is proud of the role it played in bringing that about.

Kellogg College is now home to over 1400 students and has over 100 Fellows of various categories – and it continues to grow. Students are admitted from some 200 courses across the University. The students are drawn from around 100 countries throughout the world in fulfilment of the College’s mission to create more opportunities for lifelong learning and to give more people access to Oxford and a higher education. It has already established a reputation for high academic achievement and for involvement with the University’s wider community.

A short history of the College, describing its Victorian origins, drawing attention to its architectural features, and providing more detail on its development and growth is available to download. 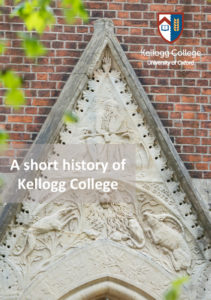 A Short History of Kellogg College