What did you do during the war? Professor Michie reflects on the role played by his father at Bletchley Park

Home » Blog » What did you do during the war?

As we mark the 75th Anniversary of VE Day, Kellogg President Professor Jonathan Michie reflects on the important role played by his father, Donald Michie, at Bletchley Park, during World War II. 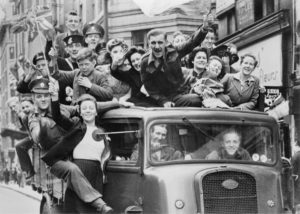 Not sure if I should divulge the contents of my late father’s love letters, but going through his papers following his death in 2007, I found one from an old girlfriend recalling how she and Donald had together left Bletchley Park on VE Day to join the celebrations in Trafalgar Square. (Recently the media reported that 19-year-old Princess Elizabeth and 14-year-old Princess Margaret went unnoticed when they too joined the crowds – certainly unnoticed by Donald’s then girlfriend, or uncommented upon, at least.)

Donald hadn’t mentioned this Bletchley Park girlfriend, so I don’t know her role, but perhaps one of the women codebreakers – while three quarters of Bletchley Park’s 10,000 workers were women, they were in a minority amongst the codebreakers. (One was Joan Watkins, who became Joan Thirsk when marring fellow Bletchley codebreaker Jimmy Thirsk – Joan went on to become a distinguished economic and social historian, and Honorary Fellow of Kellogg College; Joan died aged 91, but Jimmy gave a fascinating talk at Kellogg’s 2017 Bletchley Park Week, aged 103, before passing away a year and a bit later.)

Our father Donald had won an open entrance scholarship to study classics at Balliol College, Oxford, but the war intervened. Instead, he attempted to enrol on a Japanese language course for intelligence officers, so he could be dropped behind enemy lines in China. Fortunately for me and his other children – as I can’t imagine him having lasted long behind enemy lines in China – the course was already full. Instead, he enrolled for a course in cryptography, did well, and was soon transferred to Bletchley Park where he was assigned to the “Testery”, dedicated to breaking the German high-level cipher code-named Fish.

In his obituary of Donald, Professor Stephen Muggleton (Head of the Computational Bioinformatics Laboratory at Imperial College London) reported how in April 1944 Donald invented a technique for using the Colossus computer to automatically decode the secondary wheel of the Lorentz machine, which the Germans used for encoding Fish. This innovation endowed Colossus – the world’s first electronic programmable computer – with a degree of general-purpose programmability, and led to a last-minute enhancement in the construction of Colossus II. According to Professor Muggleton (accessing material which had been declassified only recently before he wrote his 2007 obituary – more than 60 years after the war ended!), “The results were dramatic. Texts which previously had taken days to decipher could now be completed in hours, allowing repeated effective interception of enemy attacks.” (Stephen Muggleton, obituary of Donald Michie: Key wartime code-breaker who became a leader in the field of artificial intelligence, Guardian, 10th July 2007, www.theguardian.com/science/2007/jul/10/uk.obituaries1).

Like the rest of the Bletchley Park workers, Donald said little until the 1980s or later. The one exception was him telling us as children that when we were taught in school that the computer was invented by the Americans in 1948, it wasn’t true. (Which didn’t make us popular with our schoolteachers – a little knowledge is a dangerous thing.)

Alan Turing and Donald used to play chess once a week in the pub near Bletchley Park, not because either were any good, but to discuss whether they could build a machine that would not only play, but learn as it did so – from which came machine learning, artificial intelligence and robotics.

At Kellogg’s 2020 Bletchley Park Week, there was a debate around the extent to which artistic license is appropriate in film-making, to boost popular appeal, with Kellogg’s Bletchley Park Fellow Sir Dermot Turing complaining at Benedict Cumberbatch’s depiction of Alan Turing [younger brother of Sir Dermot’s father] in The Imitation Game. There were arguably far greater transgressions from the truth in that film’s Hollywoodisation of events, the most egregious of which, in my view, was that when in the film they showed Alan Turing playing chess in that pub, it would have been with Donald, not with Keira Knightley!

Sir Dermot may have had a point about Cumberbatch’s over-acting, although Alan Turing’s distrust of authority, including the monetary authorities, led him to convert his cash into silver bars, which he buried in the fields surrounding Bletchley Park. At the end of the war he offered Donald one third of the silver in return for helping to retrieve the hidden bars. Donald agreed to do the digging for a daily payment, rather than sharing the proceeds, which turned out to be wise, as after several days digging, Alan gave up, having failed to recall any of the hiding places.

So, when you join Kellogg’s day trip to Bletchley Park in 2021, it might be worth checking out the surrounding fields.